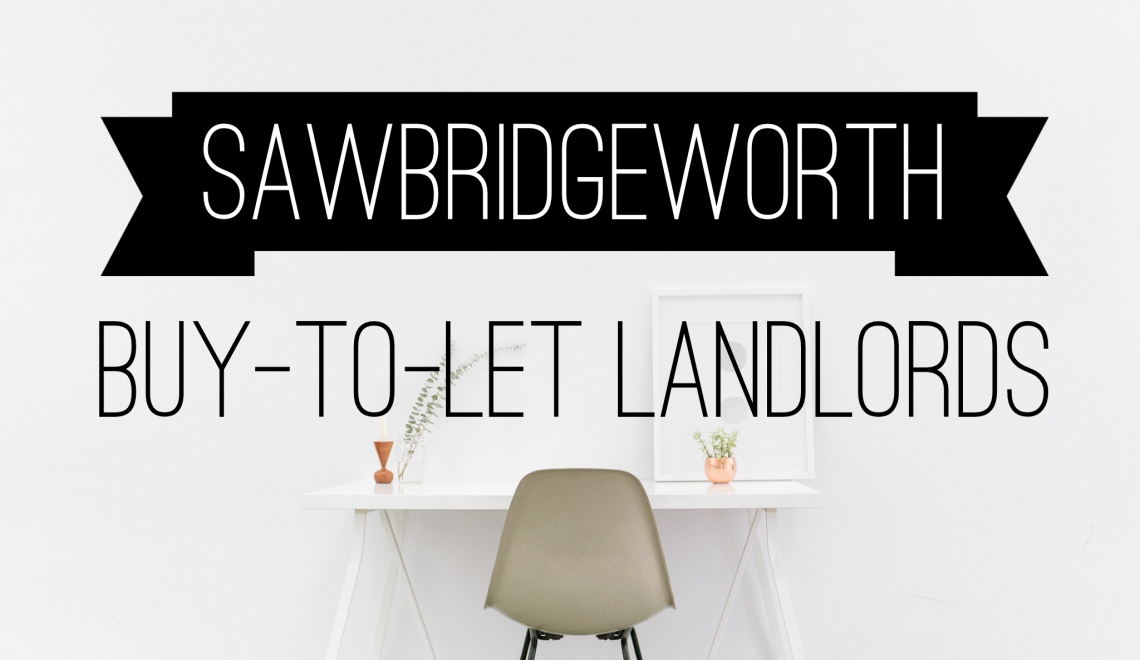 There is no escaping the fact that over the last couple of decades, the rise in the number buy to let properties in Sawbridgeworth has been nothing short of extraordinary. Many in the “left leaning” press have spoken of a broken nation, the fact many youngsters are unable to buy their first home with the rise of a new cohort of younger renters, whom have been daubed ‘Generation Rent’ as landlords hoover up all the properties for their buy to let property empires. Government has been blamed in the past for giving landlords an unfair advantage with the tax system. It is also true many of my fellow professionals have done nothing to avail themselves in glory, with some suspect, if not on some rare occasions, downright dubious practices.

Yet has the denigration and unfair criticism of some Sawbridgeworth landlords gone too far?

It was only a few weeks ago, I read an article in a newspaper of one landlord who had decided to sell their modest buy to let portfolio for a combination of reasons, one of which being the new tax rules on buy to let that were introduced last year. The comments section of the newspaper and the associated social media posts were pure hate, and certainly not deserved.

But are the 251 Sawbridgeworth portfolio buy to let landlords at fault?

The Tories allowed people to buy their own Council house in the 1980’s, taking them out of the collective pot of social rented houses for future generations to rent them. Landlords have been vilified by many, as it has been suggested by some they have an unhealthy and ravenous avarice to make cash and profit at the expense of poor renters, unable to buy their first home. Yet, looking beyond the headline grabbing press, this is in fact ‘fake news’. There are seven reasons that have created the perfect storm for private renting to explode in the 2000’s.

To start with, the Housing Acts of 1988 and 1996 gave buy to let landlords the right to remove tenants after six months, without the need for fault. The 1996 Act, and its changes, meant banks and building societies could start to lend on buy to let properties, knowing if the mortgage payments weren’t kept up to date, the property could be repossessed without the issue of sitting tenants being in the property for many years (even decades!) … meaning in 1997, buy to let mortgages were born… and this, my blog reading friends, is where the problem started.

Secondly, in the early 2000’s, those same building societies and banks were relaxing their lending criteria, with self-certification (i.e. you did not need to prove your income), mortgages 8 times their annual salary, and very helpful interest only mortgage deals helped to keep repayments inexpensive.

Thirdly, the totally inadequate building of Council Houses (aka Local Authority Housing) in the last two decades and (so I’m not accused of Tory bashing) – can you believe Labour only built 6,510 Council Houses in the WHOLE OF THE UK between 1997 and 2010? Giving the Tories their due, they have built 20,840 Council Houses since they came to power in 2010 (although still woefully low when compared the number of Council Houses built in the 1960’s and 1970’s when we were building on average 142,000 Council Houses per year nationally). This meant people who would have normally rented from the Council, had no Council House to rent (because they had been bought), so they rented privately. 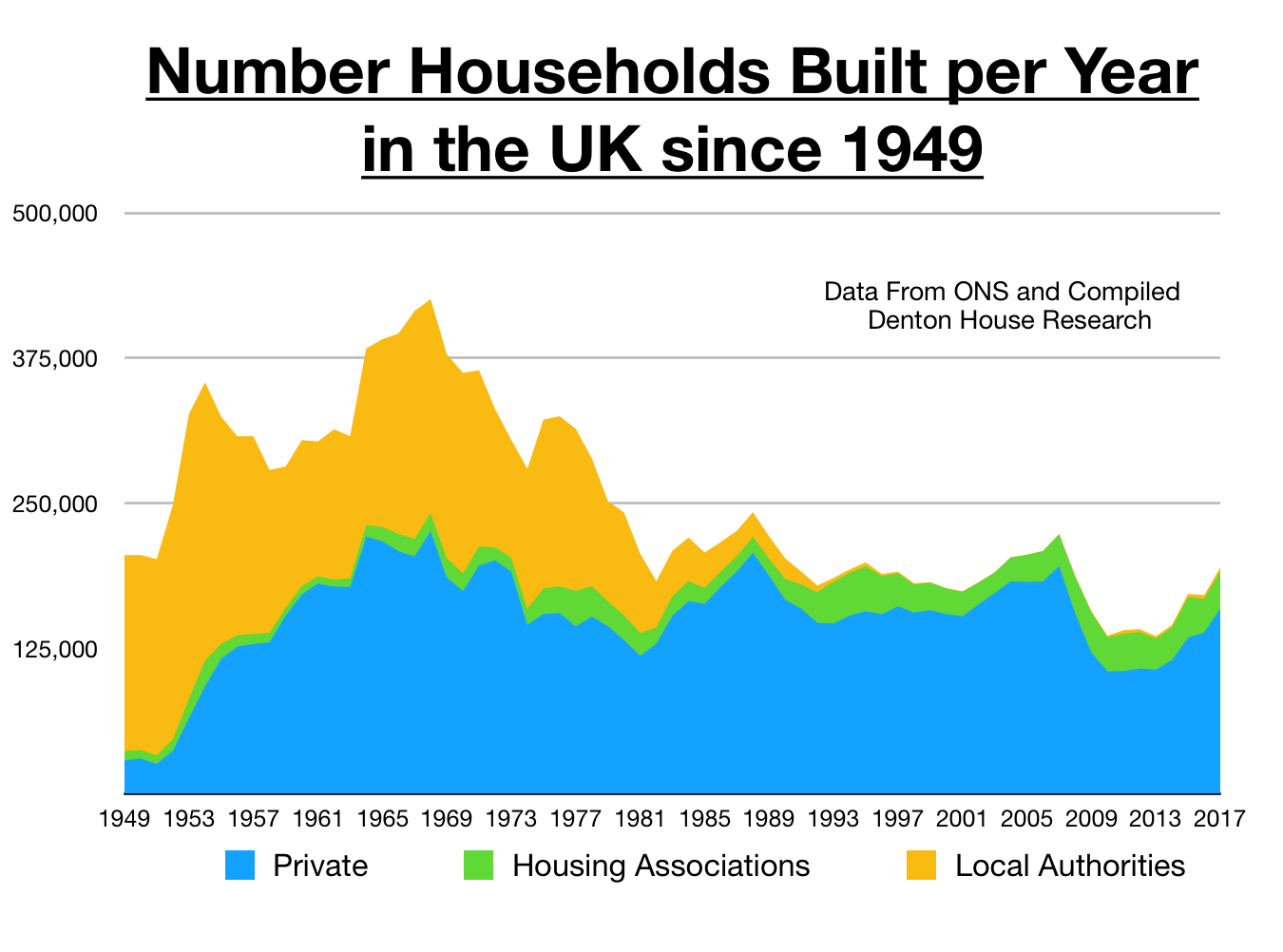 • Less of private home building (again look at the graph) over the last two decades.

• A loss of conviction in personal pensions meaning people were looking for a better place to invest their savings for retirement.

• Ultra-low interest rates for the last nine years since the Credit Crunch meaning borrowing was cheap.

• A massive increase in EU migration from 2004, when we had eight Eastern European countries join the EU. That brought 1.4m people to the UK for work from those countries – and they needed somewhere to live.

Thus, we got the perfect storm conditions for an eruption in the Sawbridgeworth Private Rented Sector.

Commercially speaking, purchasing a Sawbridgeworth property has been undoubtedly the best thing anyone could have done with their hard-earned savings since 1998, where property values in Sawbridgeworth have risen by 289.06%…

…and basing it on the average rental in Sawbridgeworth, earned £203,688 in rent.

Yet, the younger generation have lost out, as they are now incapable to get on the property (especially in Central London).

The Government have over the last few years started to redress the imbalance, increasing taxes for landlords, together with the Banks being tighter on their lending criteria meaning the heady days of the Noughties are long gone for Sawbridgeworth landlords. In the past 20 years, anything but everything made money in property and it was easy as falling off a log to make money in buy to let in Sawbridgeworth – but not anymore.

Being a letting agent has evolved from being a glorified rent collector to a trusted advisor giving specific portfolio strategy planning on each landlord’s buy to let portfolios. I had a couple of instances recently of a couple of portfolio landlords, one from Hunsdon who wanted income in retirement from his buy to let’s and the other from Much Hadham, who wanted to pass on a decent chunk of cash to his grandchildren to enable them to buy their own home in 15/20 years’ time.

Both of these landlord’s portfolios were woefully going to miss the targets and expectations both landlords had with their portfolios, so over the last six/nine months, we have sold a few of their properties, refinanced and purchased other types of Sawbridgeworth property to enable them to hit their future goals (because some properties in Sawbridgeworth are better for income and some are better for capital growth) … And that my blog reading friends is what ‘portfolio strategy planning’ is!

If you think you need ‘portfolio strategy planning’, whether you are a landlord of ours or not (because the Hunsdon landlord wasn’t)… drop me line or give the office a call. Thank you for reading.